But things aren’t as clear-cut this time around, with several other parties rising in the polls.

Here’s a visual look at some key issues and themes which could shape the outcome on election night.

The focus of campaigning tends to be on the party leaders and who will be prime minister.

But in reality, under Canada’s system of government, it’s 338 separate races, with candidates in each of the country’s federal ridings (constituencies) from coast to coast to coast.

They are all fighting for their chance to sit in Canada’s House of Commons – which loosely resembles its British namesake. 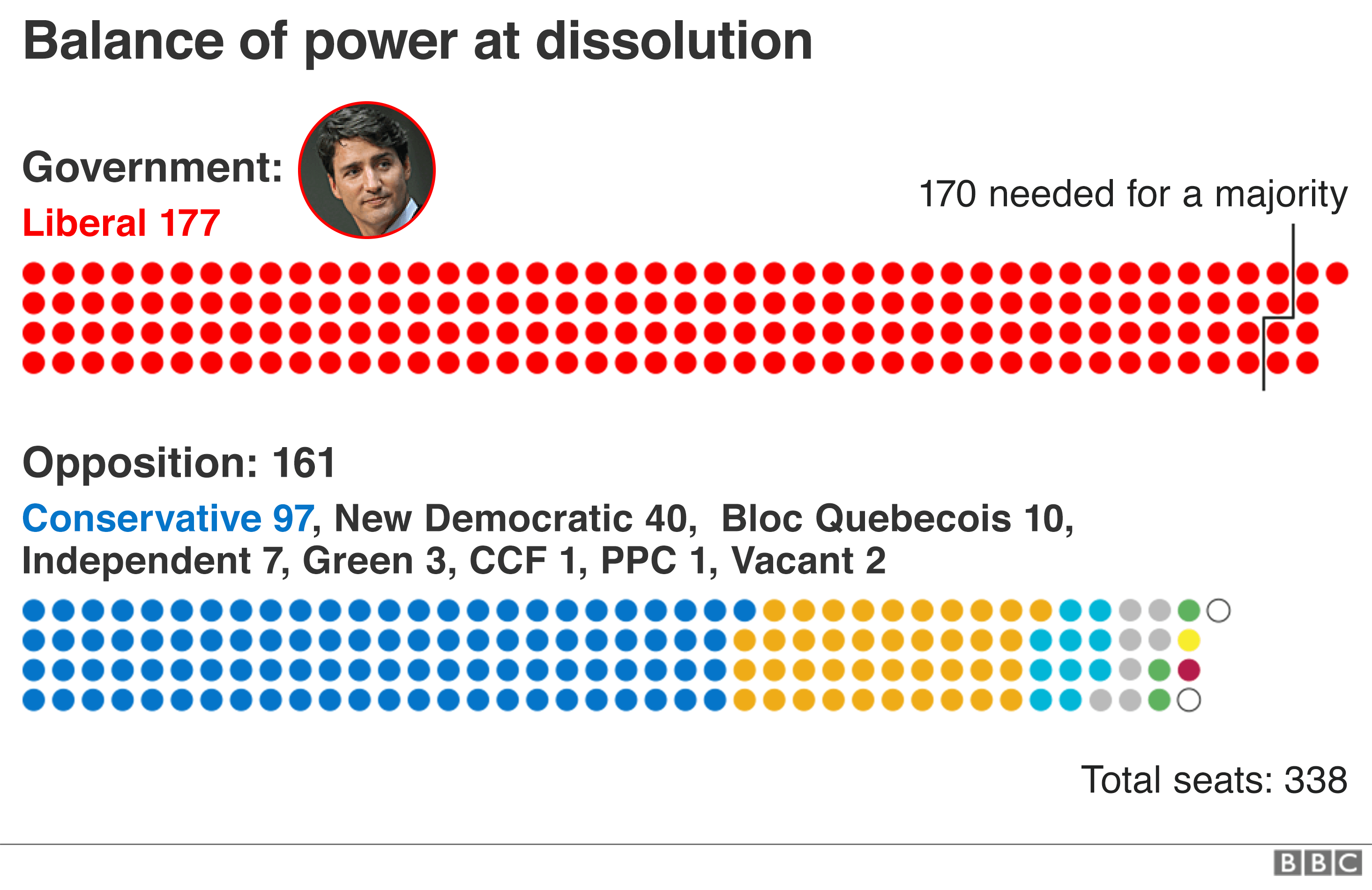 In 2015, Justin Trudeau and his Liberal candidates won 184 seats – a solid majority. Minority governments are formed when no party wins more than half the seats.

A minority government is typically, but not necessarily, formed by the party that has the most seats – but it needs the support of other parties to pass legislation.

A record number of women are standing

That represents a 9% increase from 2015, according to Equal Voice Canada. 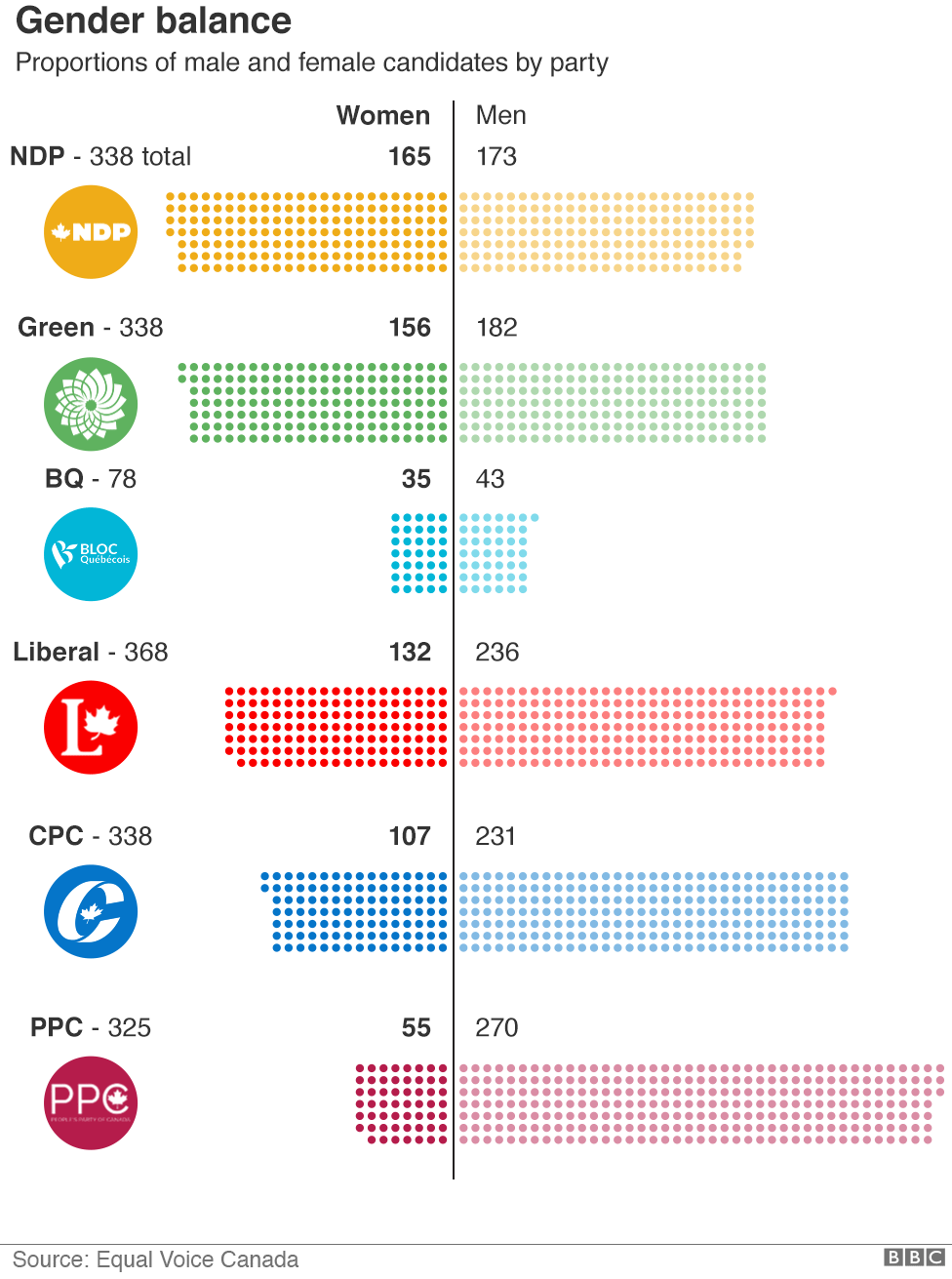 Equal Voice says it’s a “great stride”, although there remains work to do.

“If every single woman elected in the history of Canada were to sit together in the House today, they would not fill the Chamber’s 338 seats,” the group said in a statement.

“Following this election, we expect that will finally change.”

Health care is a perennial concern for Canadian voters.

But amid a push for governments around the world do to more the tackle the issue, climate change has been dominating as one of the issues that matters most to voters. 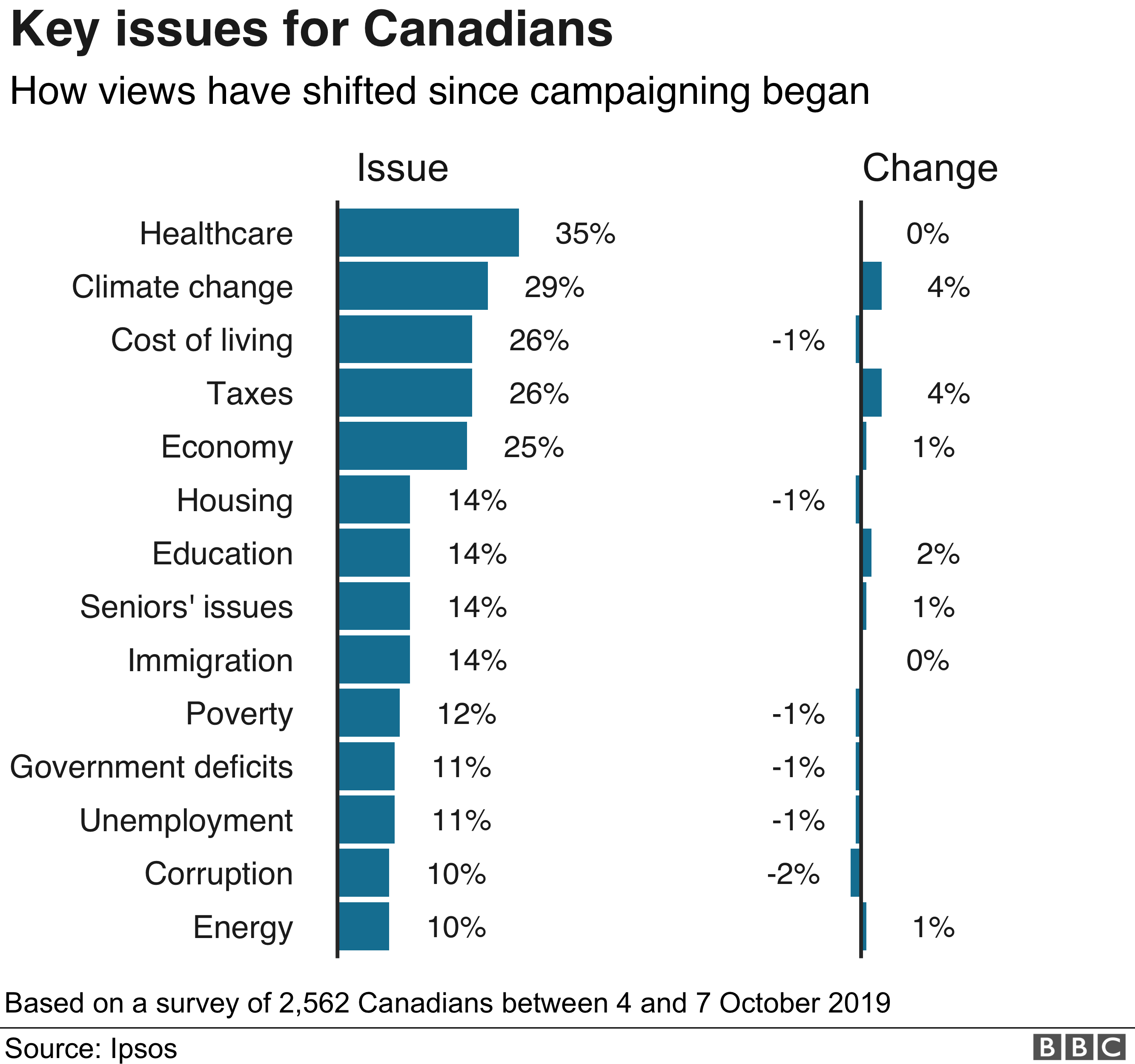 Mr Trudeau made meeting the Paris Accord targets a cornerstone of his campaign in 2015, and his record will be judged at the ballot box.

The decision by his Liberal government to buy the Trans Mountain Pipeline, which would carry crude oil from Alberta to British Columbia, in order to ensure a project to triple its capacity goes ahead, has also faced criticism. 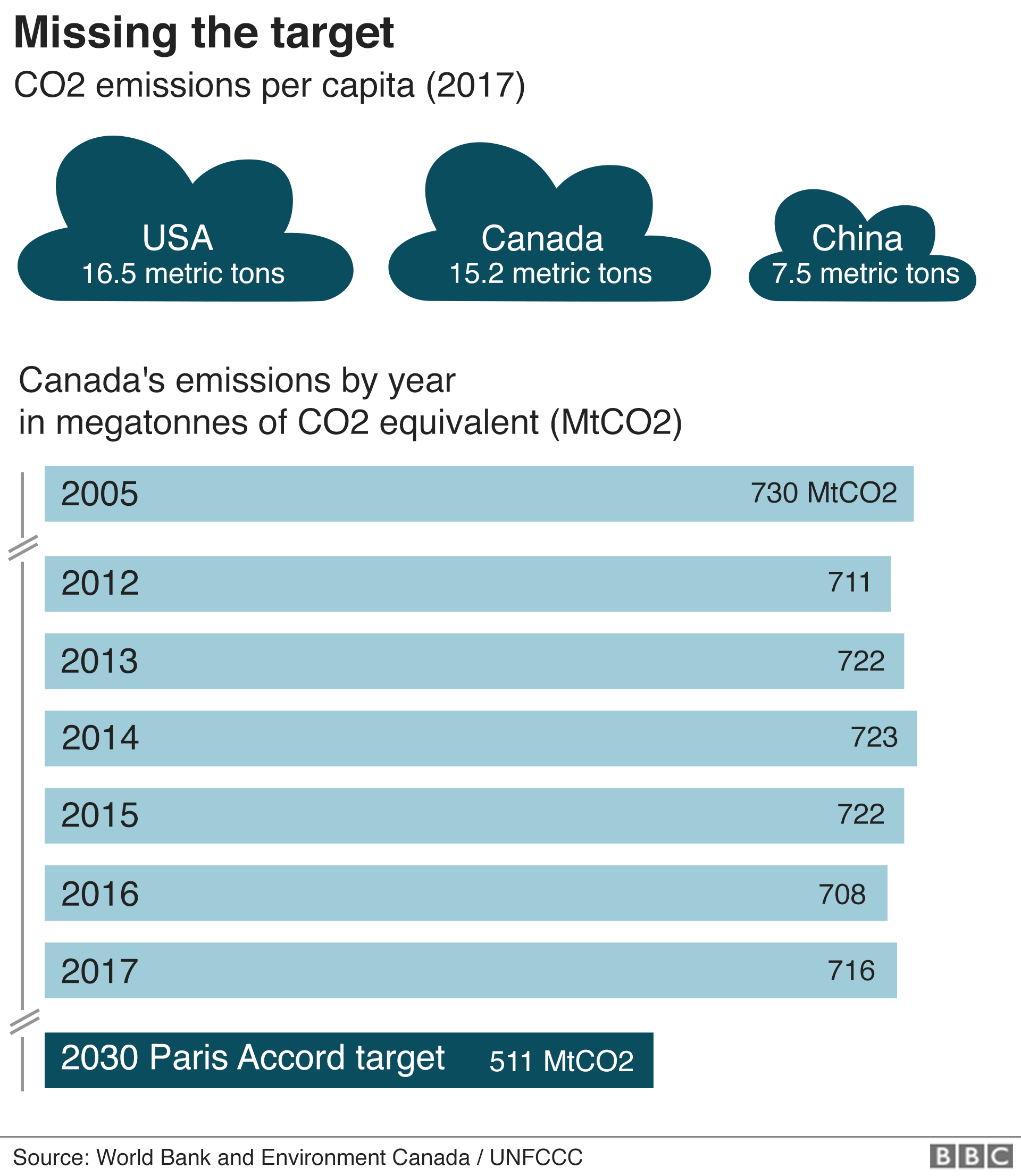 House prices have soared and wage growth has slowed

Despite low unemployment and modest economic growth, Canadians are feeling anxious about their economic future.

The cost of living has been identified as a priority in this campaign and all the federal parties are rolling out policies aimed at making life more affordable for Canadian families, from tax relief to making it easier for first-time homebuyers to get into the housing market – especially in booming cities like Toronto and Vancouver. 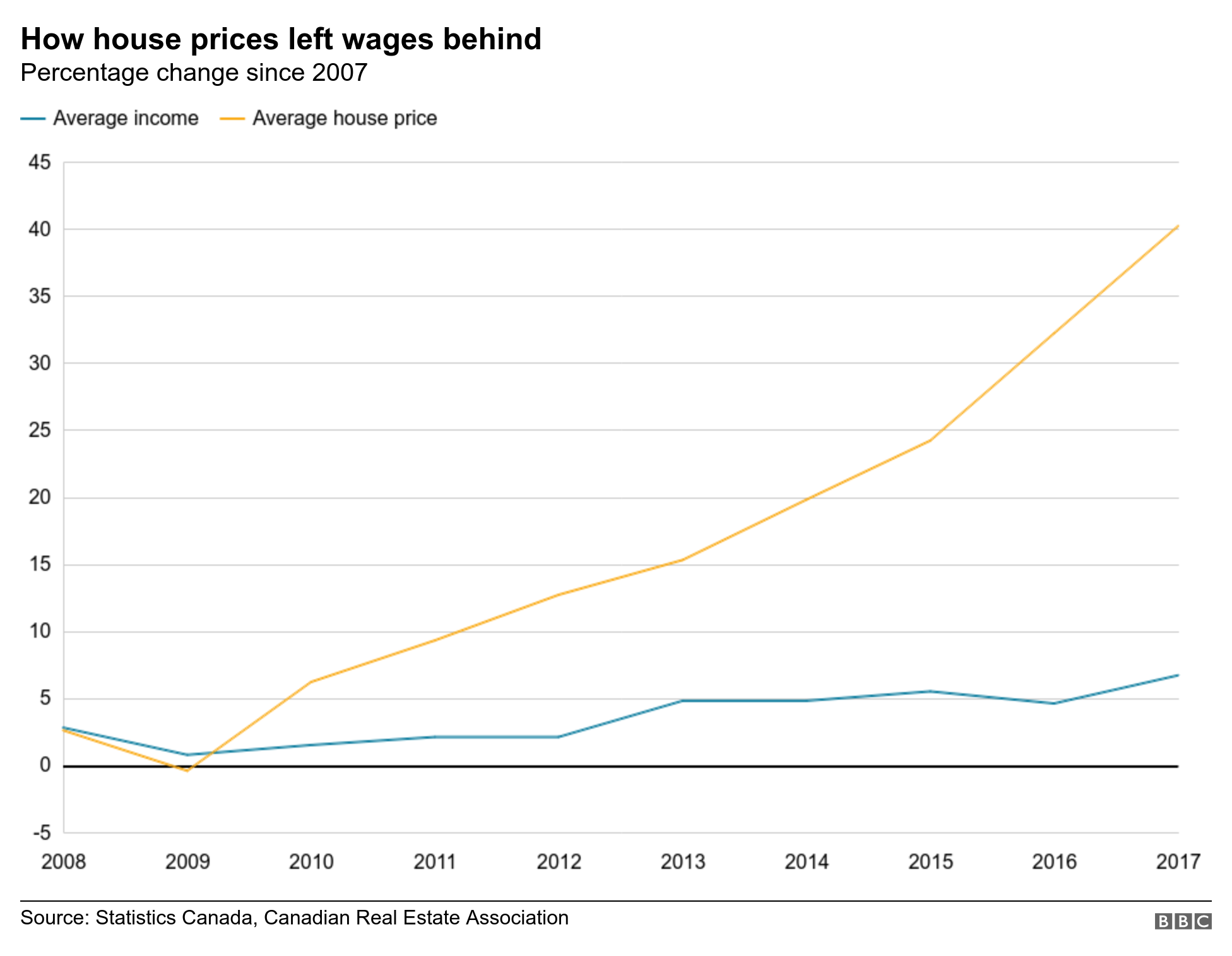 The regions to watch

The results of Monday’s election will be largely decided in three key, vote-rich regions: Quebec, the Greater Toronto Area, and in Lower Mainland British Columbia.

Key ridings to watch in Quebec

Here we look at one – the province of Quebec – where the vote has been volatile in recent years. This election is no different.

Going into the campaign’s final days, the Bloc Quebecois – a federal party focused on Quebec sovereignty – is in a strong second place and nipping at the Liberals’ heels.

Quebec voters are taking another look at a party – which only runs candidates in that province – they had relegated to the sidelines in the past two elections.

The Conservatives, who are tied with the Liberals in national polls, are trailing in third.

And while the left-leaning NDPs have momentum in other parts of the country, they haven’t gained much traction in Quebec and could lose most of the 14 seats they hold there.

The perils of door-knocking

Canada is a vast nation, with large swathes of wilderness.

This can be a challenge for traditional door-to-door campaigning. Canada’s largest federal riding in geographical terms, Nunavut, is the size of seven United Kingdoms.

In comparison, a candidate could easily walk Canada’s smallest riding – Toronto-Centre – in a matter of hours. 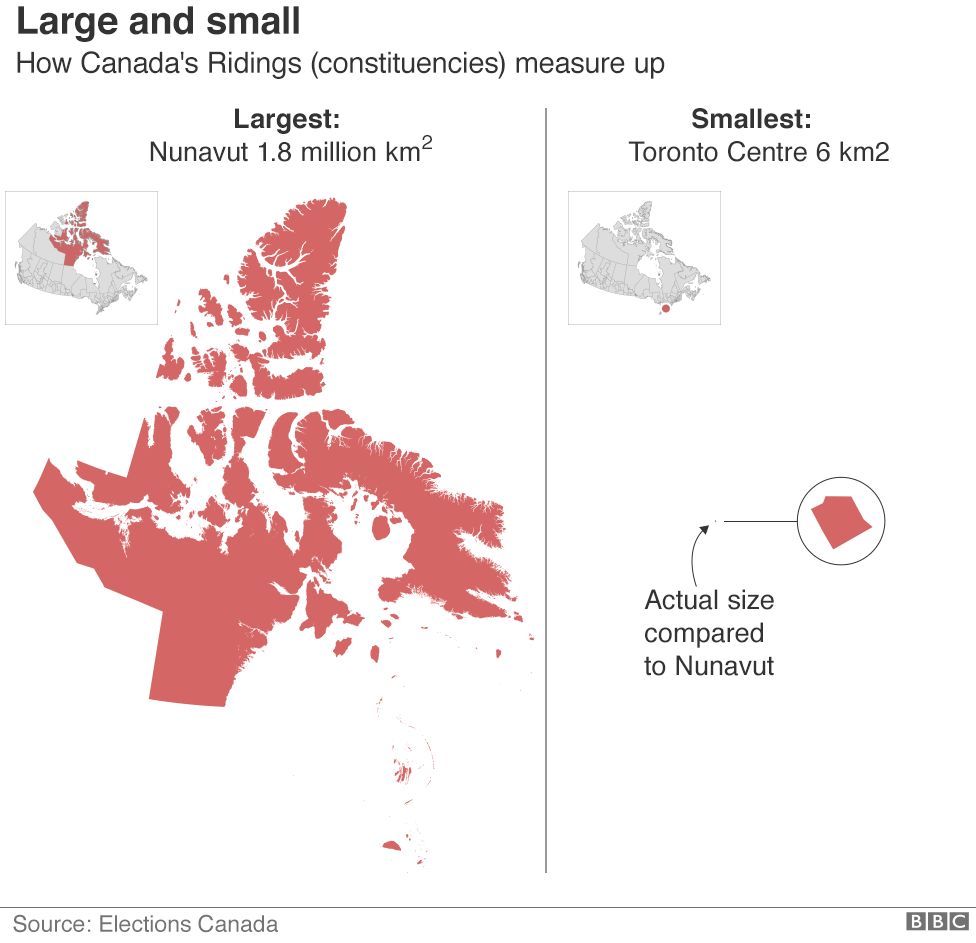 Houston, We Have The World’s 1st All-Female Spacewalk Team