For the first time, all Canada’s main party leaders were on stage together, in what is likely to have been the most watched TV debate in this federal election campaign.

So the stakes were high.

It was a crowded stage: Liberal leader Justin Trudeau, the Conservatives’ Andrew Scheer, Jagmeet Singh of the New Democratic Party (NDP), Green Party leader Elizabeth May, Maxime Bernier from the People’s Party of Canada, and – in Quebec – the Bloc Québécois, led by Yves-François Blanchet.

The Conservative Party of Canada and self-inflicted stumbling

Did any of them stand out from the crowd? Were there any performances sharp enough to finally shift opinion polls that have barely budged since the election was called in mid-September? What topics sparked fireworks?

Here are some key takeaways.

Front-runners trade blows, but no knockout

The Conservatives and the Liberals have been locked in a dead heat for the entire campaign, so this was a chance to get some momentum before Canadians head to the polls on 21 October.

Both parties need to break that deadlock – and the two front-runners frequently went head-to-head, occasionally talking over each other to the point of incoherence.

Andrew Scheer attacked Mr Trudeau straight out of the gate – slamming him as “a phony” and “a fraud” who doesn’t deserve to be re-elected, and continued to go after him repeatedly on two issues that have been his Achilles heel with voters: the SNC-Lavalin affair and the blackface scandal.

With SNC-Lavalin, a federal ethics commissioner found the prime minister improperly tried to influence his former minister to prevent the construction company being prosecuted for corruption – a political crisis that caused Mr Trudeau to slump in the polls earlier this year. 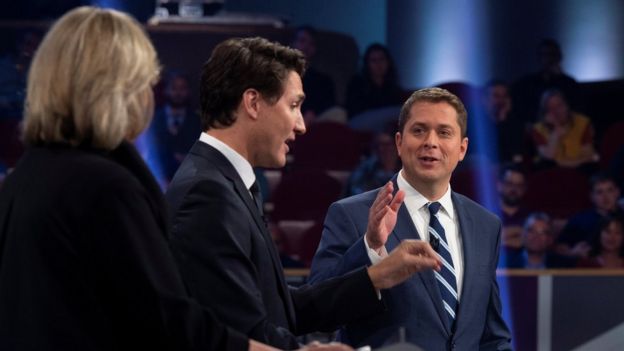 But the Liberal leader’s electoral fortunes seem to have recovered, despite old images of him in blackface surfacing in September.

And pivoting on Mr Trudeau’s frequent attempts to link the federal Conservative leader with Ontario Premier Doug Ford, who has made unpopular budget cuts in the vote-rich province, Mr Scheer snapped: “You seem to be oddly obsessed with provincial politics”.

Mr Trudeau proved willing to fight back and make his Conservative political rival his rhetorical punching bag, forcing him to defend his stance on social issues such as abortion rights.

Mr Scheer is “personally pro-life” but has repeatedly said that, if elected, his party will not put forward or support legislation that would regulate abortion.

The Liberal leader also defended his record in government, including a strong economy, less poverty and low unemployment.

Singh challenges for the progressive vote

Mr Trudeau is hoping for a repeat of the 2015 federal election, when those progressive voters coalesced around his Liberals, sweeping them to victory.

Jagmeet Singh worked hard to position himself as a reasonable third option between Mr Trudeau and Mr Scheer. 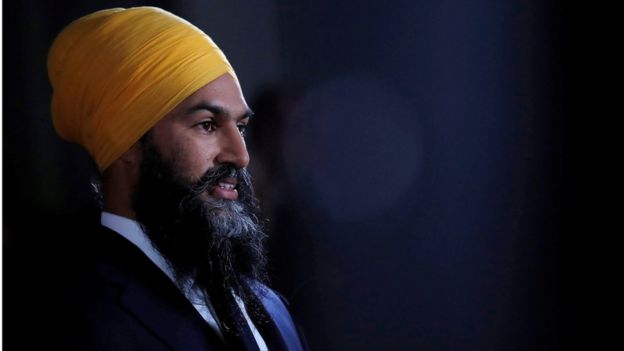 He was frequently able to break into the discussion and get his pitch across to voters: that his party is “in it for the people, we’re not in it for the rich”, and to land some of the more memorable zingers of the night.

After a heated debate between Mr Trudeau and Mr Scheer over their climate plans, he jumped in with the line: “You do not need to choose between Mr Delay and Mr Deny.”

The stakes for the Bloc’s Mr Blanchet were relatively low on Monday night.

Few English-speaking voters in Quebec would be considering casting a ballot for his party, which only runs candidates in that province.

The Bloc leader mostly focused on issues central to Quebecers, like Bill 21, the controversial provincial secularism law that bars civil servants deemed to be in positions of authority from wearing religious symbols at work.

Mr Blanchet will have another chance to make an appeal to voters in a French-language leaders’ debate on Thursday.

Climate change has emerged as a major issue in this election, and Mr Trudeau clashed with other leaders over how his government has handled the issue.

She also made a direct appeal to voters to cast their ballots for the Greens so they might hold power in a minority situation. 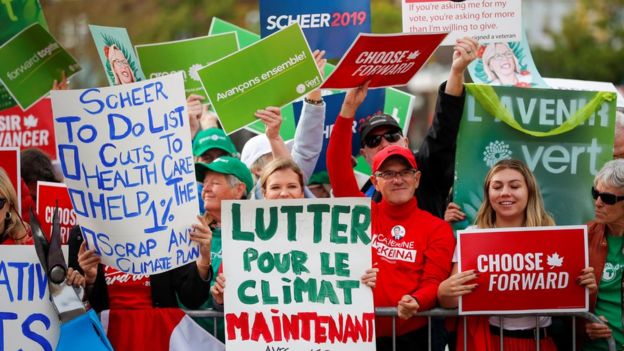 The Liberal leader repeatedly called his climate change plan “reasonable and doable” – a dig at other federal parties like the Greens, which have more ambitious climate targets than the Liberals’ current commitments.

Since he was first elected in 2015, Mr Trudeau has always pitched the possibility of finding a balance between the economy and the environment – and he has to convince voters again that a Liberal government is best placed to do just that.

But he has come under pressure for buying a crude oil pipeline for C$4.5bn ($3.4bn; £2.6bn) last year – a move intended to triple the capacity of the controversial project.

“You bought a pipeline – you can’t be a climate leader,” Ms May told Mr Trudeau on Monday night.

People’s Party of Canada leader Maxime Bernier was a late addition to the debate line-up. Polling nationally in the low single digits, he was originally excluded before the national debate commission reversed its decision.

He made the most of his time on the stage, frequently interrupting the other leaders.

Mr Bernier has courted controversy as a political leader, including with Twitter rants against the “cult of diversity” and young climate activist Greta Thunberg.

He is also seeking to limit the number of immigrants to Canada – for which he was attacked from all sides on the debate stage.

His inclusion in the debate was criticised by Mr Singh, who told him that he did not “deserve a platform”.

“It’s not because I have a different point of view that I’m not supposed to be there,” Mr Bernier later told journalists.

Turkey begins an offensive against Kurdish fighters in Syria