Despite a welcome boost in the amount of money Ottawa spends on foreign aid, the federal government’s new budget puts Canada’s international development assistance well below the average spent by its peers in the Organization for Economic Co-operation and Development (OECD), say actors in the Canadian humanitarian and development community.

CARE Canada President and CEO Gillian Barth said that while the budget marks a welcome first step that will provide a measure of certainty and allow for longer-term planning, it falls short of expectations.

The money set aside for foreign aid is also barely enough to keep Canada at the same level of official development assistance (ODA) as in the past, said Julia Sanchez, president and CEO of the Canadian Council for International Co-operation (CCIC), an umbrella group that brings together Canadian-based international development and humanitarian organizations.

The ODA is a ratio used internationally to measure what portion of a country’s wealth its government spends on development assistance.

Canada’s ODA is about 0.26 per cent of its gross national income (GNI), according to data collected in a report by the OECD last year.

That’s well below the 0.32 average for the 29 Development Assistance Committee (DAC) countries and the 0.7 per cent target established by a 1970 resolution of the United Nations General Assembly.

“We’re only about a third [of the] way there and that’s not going to change over the next five years if the government doesn’t increase its commitments in the next budget moving forward,” Sanchez said.

“We are hosting the G7 this year. Canada wants to show leadership but we actually have the lowest level of ODA than any other of the G7 countries. So we’re really not in a good place.”

In fact, only six OECD countries — Denmark, Germany, Luxembourg, Norway, Sweden and the U.K. — met or exceeded the 0.7 target in 2016, according to the OECD report.

“What we find … dangerous and unfortunate [is] that at a time when the world is looking at Canada to play a leadership role, especially on the international scene with a lot of other countries looking inward … we’re actually lowering the bar, because we’re saying it’s actually OK to be at 0.26,” Sanchez said. 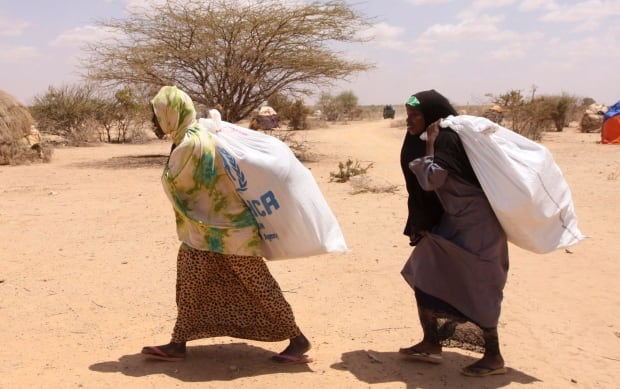 “This new investment will strengthen the impact of our Feminist International Assistance Policy and will make a real difference, especially for millions of women and girls,” Bibeau said in an emailed statement.

The budget also will provide $1.5 billion over five years to support innovative approaches to international development, she said.

“This will give Canada new opportunities to leverage partnerships with aid organizations as well as the private sector to mobilize additional resources for international development,” Bibeau said.

There are other positive signals in the budget as well, Sanchez said.

For example, when the Liberals released their Feminist International Assistance Policy last year, there was no new funding commitment attached to it.

“Now we are seeing a shift in that position and they are actually putting new money in the budget to implement this policy,” Sanchez said. “It’s a positive shift in tone and in position.”

There is also greater predictability and transparency in the budget, Sanchez said.

“The budget amounts were released now for the International Assistance Envelope, which we haven’t seen in almost seven or eight years now,” she said.

Barth also warmly welcomed the government’s decision to set aside $738 million for humanitarian assistance in 2018-19. This will ensure that resources do not have to be diverted away from other international assistance priorities to respond to sudden emergencies, she said.

In 2016, the House of Commons Standing Committee on Foreign Affairs and International Development put out a report based on consultations that it had conducted. It recommended that the government increase its official development assistance to 0.35 per cent of GNI by 2020.

The government should aspire to a plan that would see Canada spending 0.70 per cent of its GNI on official development assistance by 2030, the report said.

In order to get to that internationally accepted benchmark, Canada needs to be increasing its foreign budget on average by 15 per cent a year, while the proposed budget increases it by only about 2 per cent a year, Sanchez said.