Canada’s unemployment rate nudges down to 5.8% in February

Canada’s unemployment rate nudges down to 5.8% in February

Canada’s job market added about 15,000 jobs in February, less than expected but enough to nudge the unemployment rate down to 5.8 per cent.

Statistics Canada reported Friday that the health-care and social assistance sectors added jobs, while wholesale and retail trade, and manufacturing all shrank.

By province, New Brunswick and Nova Scotia added jobs, while Saskatchewan lost some.

Canada’s economy is resilient, but headwinds will keep the Bank of Canada in its holding pattern

Canada’s economy slows even as business investment perks up

There was little change everywhere else.

While the job market expanded somewhat, it comes after a huge loss of 88,000 positions the previous month.

“The spinning wheel landed on black this month, but the overall tone to this report was neutral,” Bank of Montreal economist Doug Porter said of the numbers.

He took particular notice of the details below the surface. Part-time jobs accounted for all of the gains (up by 54,700 positions), while full-time jobs declined for the first time in six months, losing almost 40,000 jobs.

Most of the gains were driven by public-sector employment, which increased by 50,000 jobs.

Most economists agree that public-sector job growth isn’t sustainable, and private-sector job gains are needed to maintain growth. But the economy only added 8,000 of those during the month, while losing 43,000 self-employed positions.

“That’s not a ‘problem’ per se in that the public sector related categories contain many high quality jobs,” Scotiabank economist Derek Holt said. “The reason I say it’s a problem has more to do with the fact that I would have thought that private sector payroll employment might have rebounded more than it did.”

The numbers were underwhelming about wages, too, as gains for full time permanent employees decelerated from 3.3 per cent in January to 3.1 per cent in February.

“Given the recent wide and wild swings in Canadian jobs, we would be extra careful about not reading too much into the finer points,” Porter said, “but the details of February’s report were mixed.” 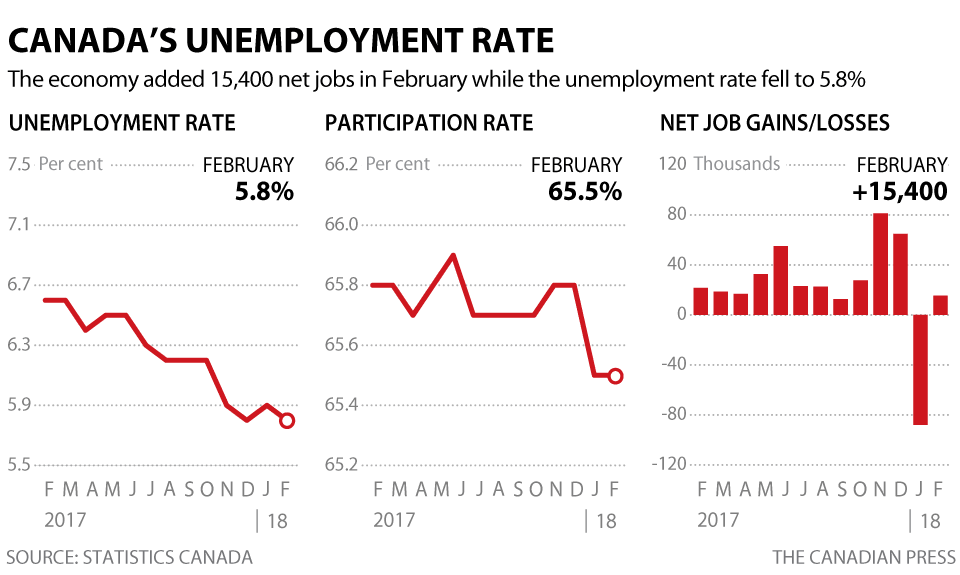