A few weeks ago, at a medical conference for the Canadian Consortium for the Investigation of Cannabinoids in Toronto, things got heated. And that’s putting it nicely.

In attendance were scientists who study cannabis, physicians, pharmacists, and nurses. They were all there to discuss what should happen with medical cannabis policy, when the drug becomes legal for anyone to use.

When the Canadian Medical Association started to explain their position, things got ugly. That position in a nutshell? The powerful medical body wants to wash their hands of the medical cannabis program, once the drug is legal.​

“Our view is really that now that the government is obviously intending to legalize this, once this is a substance that’s available to all Canadians, there’s really no need for physicians to continue to serve in that gatekeeper role.” – Dr. Jeff  Blackmer , Canadian Medical Association

Others strongly disagree, which led to booing, hissing and ultimately the CMA representative walking out.

The CMA representative who walked out of that conference is Dr. Jeff Blackmer, the vice president of medical professionalism. He says the CMA has been vocal about its opposition to the medical cannabis system since the very beginning.

“Our view is really that now that the government is obviously intending to legalize this, once this is a substance that’s available to all Canadians, there’s really no need for physicians to continue to serve in that gatekeeper role.”

Whereas on the other side of the debate, Dr. Mark Ware — who was the executive director of the consortium that organized the conference and a medical cannabis researcher at McGill University —says Canada already has a Cannabis Act, which addresses medical uses.

“The worry I see with losing a medical program is it really completely takes the need for a clinician oversight out of the equation,” says Dr. Ware. 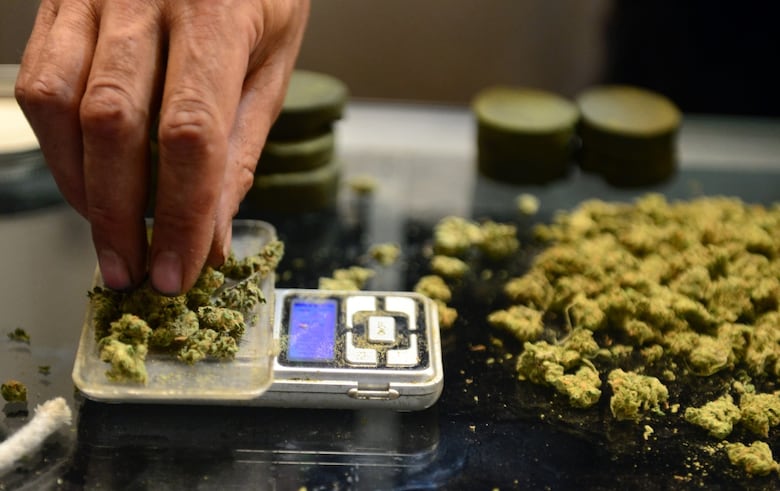 “You’re likely to have questions about the potential interaction of cannabis or cannabinoids with those other medications.”

Dr. Ware says other questions patients might have for physicians include:

“We think that that’s the kind of thing that you should talk to your doctor about before you embark on that. And then that you should have access to a product, which is at least regulated to the point where you can be sure that when you purchased it, it contains what the label says it contains.”

“The worry I see with losing a medical program is it really completely takes the need for a clinician oversight out of the equation.” – Dr. Mark Ware, McGill  University

According to Dr. Ware, who studies the effect of medical cannabis on pain,  strong evidence exists to suggest that cannabinoids, the active ingredient in the cannabis plant which give it its therapeutic potential, have been shown to be effective in various medical ailments.

“THC, the psychoactive ingredient, looks like it’s effective in managing some forms of severe neuropathic pain, spasticity, and neuropathy in association with multiple sclerosis, appetite loss in patients with HIV wasting syndrome, nausea and vomiting in patients with chemotherapy. And also CBD, the non-psychoactive ingredient, appears to be looking very promising in the treatment of epilepsy in young children with severe convulsive disorders.” 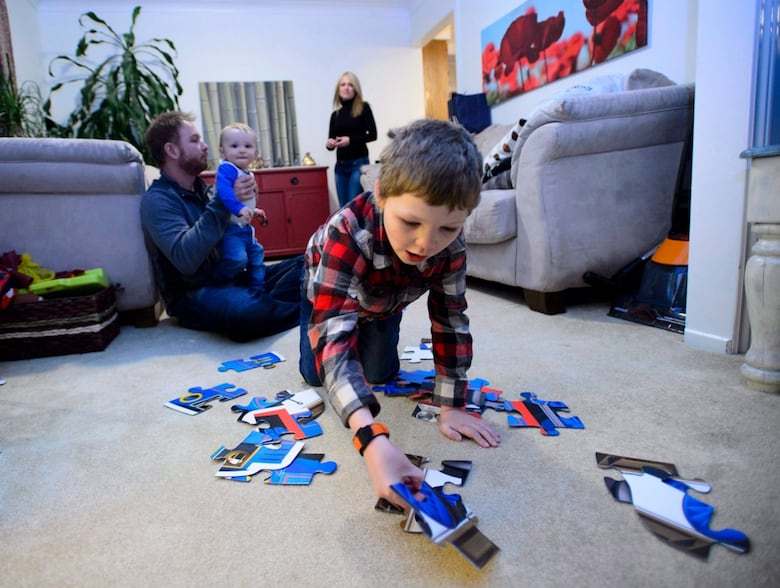 Dave McKnight plays with his son Fin as his older son Liam plays and his wife Mandy looks on at their home in Constance Bay, Ont. Liam suffers from Dravet syndrome which causes severe seizures and uses medical cannabis oil as a form of treatment. (Sean Kilpatrick/Canadian Press)

There are also many other medical issues that cannabis reportedly provides relief for, such as:

But the science behind how effective medical cannabis is in providing relief to these symptoms is less well established.

The  endocannabinoids  system, a system of receptors that exists in our bodies, provides tremendous scientific rationale as to why  cannabinoids  might help in some of these conditions.– Dr. Mark Ware, McGill  University

“The endocannabinoids system, a system of receptors that exists in our bodies, provides tremendous scientific rationale as to why cannabinoids might help in some of these conditions,” says Dr. Ware.

Changes to OHIP take effect: What you need to know

At least 17 deaths in Quebec attributed to heat

When a patient goes to see their physician to ask about medical cannabis, Dr. Blackmer says this puts them in an awkward position.

“It’s important to recognize that by and large, that level of evidence doesn’t reach the quality that we demand for every other product that physicians prescribe.”

For that reason, according to Dr. Blackmer, eight out of nine physicians in Canada do not feel comfortable discussing or providing access to medical cannabis.

But Dr. Ware says it’s hard enough to find a physician in Canada. “We’re hearing from patients across the country that they’re having a hard time even engaging their physicians in this discussion and I think that’s a barrier that we need to start to break down.”

Cannabis derived products versus the plant

Health Canada has already approved a number of cannabis derived products, including synthetic cannabinoids, for medical uses where the evidence is strongest: pain, nausea, and epilepsy.

Dr. Ware says, many physicians don’t even realize those drugs exist — let alone how to prescribe them.

That said, none of these approved drugs can provide immediate relief like inhaling the dried herbal form or vaping it can.

The other issue that exists is that it doesn’t appear as though the cannabis-derived products are as effective as the plant buds seems to be. 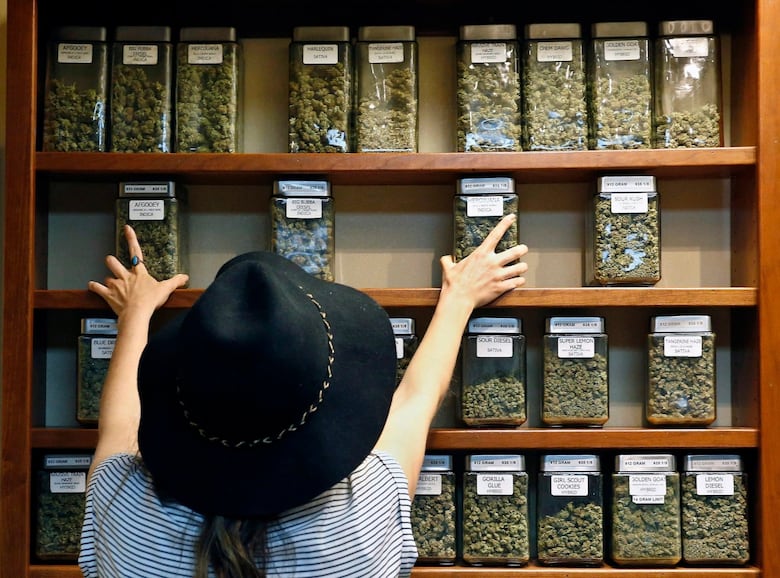 Some scientists worry that without physicians being involved in prescribing cannabis to their patients, that patients won’t know exactly what they’re getting when marijuana becomes legal. (Brennan Linsley/Associated Press)

“By virtue of purifying those resins, isolating them, and putting them into pharmaceutical products, you sort of give rise to a more standardized and clean product,” says Dr. Ware. “The challenge is, that even though we have these existing prescription cannabinoids, that these prescription medicines don’t seem to work in the same way that the herbal product does.”

There’s something known as the “entourage effect,” which hypothesizes that the many 100 plus cannabinoids contained in the plant, as well as the terpenes that give it its flavour and smell, work together in some way that to increase its effectiveness.

“That’s a hypothesis that we desperately need to test,” says Dr. Ware.

In the meantime, Dr. Ware says he thinks we already know enough about cannabis’ ingredients, the pharmacology, and metabolism to be able to safely prescribe access to the cannabis buds or oils.

Do I think clinicians have enough to be able to authorize a severely affected patient to possess cannabis. Yes I do.– Dr. Mark Ware, McGill  University

“Do I think clinicians have enough to be able to authorize a severely affected patient to possess cannabis. Yes I do. And I think we have a lot to learn,” says Dr. Ware, “but I think that with what we do know it’s possible to be done safely.”

Dr. Blackmer disagrees. “The short answer is no. Certainly, there’s not enough evidence from the science that is being done. I think there are, to be fair, challenges in doing studies on cannabis. And it’s something that I know the industry has been discussing for a number of years. It’s difficult, for example, to patent a specific strain. And obviously there’s a cost to doing these trials, so we recognize that it is a little bit unique.”

I think there are, to be fair, challenges in doing studies on cannabis. And it’s something that I know the industry has been discussing for a number of years. It’s difficult, for example, to patent a specific strain. And obviously there’s a cost to doing these trials, so we recognise that it is a little bit unique in that way.– Dr. Jeff Blackmer , Canadian Medical Association

Cannabis is an extremely complex plant with at least 115 known cannabinoids. Even if you take a clone from a plant, genetics alone aren’t solely responsible for the chemical profile that exists in the buds.

“A lot of the chemistry is genetically determined, but there’s also an environmental role,” says Dr. Jonathan Page, an adjunct professor of botany at the University of British Columbia and the CEO of Anandia Labs.

Soil, indoor versus greenhouse growing conditions, lighting systems and fertilizer regimes can all change the chemistry by modifying the environment, Page says. 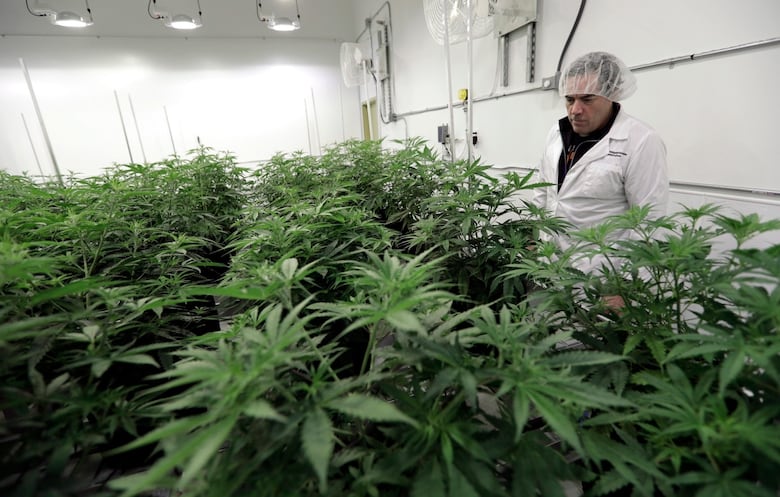 The cannabis plant’s complex chemistry is the result of its genetics and growing environment. (Eric Gay/Associated Press)

The plant’s variable nature makes it extremely difficult to test in a traditional way.

“It’s not the same as a synthetic pharmaceutical, which typically is developed and designed in a laboratory,” says Dr. Ware. “It’s put through a host of animal studies and then eventually gets into humans.”

It’s kind of like we’re always trying to put a square peg in a round hole.– Dr. Jonathan Page, University of British Columbia

Dr. Page says applying the same regulatory and scientific standards to cannabis is like, “trying to to put a square peg in a round hole.”

He thinks that since this complex plant has been in use for such a long time with only relatively minor negative effects that it’s time to change our expectations when it comes to the level of science required to prescribe medical cannabis compared to regular drugs.

Physicians, like Dr. Blackmer, look at medical cannabis the same way they do natural health products. “If a patient wants to go get a type of cream or a type of vitamin, they can do that at a pharmacy or other type of store, and they can take it for specific conditions for which it’s advertised or for which their friends take it, but it won’t have the same scientific evidence.”

“Cannabis, despite everyone’s attempts to push it into different buckets, doesn’t really fit any of our existing paradigms,” such as alcohol or tobacco, says Dr. Ware. “But it doesn’t really fit either of those. So in many ways, cannabis deserves to be handled in its own right.”

Like Dr. Page, Dr. Ware wonders if there’s another way to regulate medical cannabis that might meet the requirements of physicians writing a prescription, but which also recognizes the unique challenges of cannabis.

That’s not good enough though, Dr. Blackmer says. “I think when patients go to a doctor and they want information and they want advice they want only the highest standard of evidence.”

Health Canada says they will be maintaining a distinct system to continue to provide patients with reasonable access to cannabis for medical purposes, but they say there are proposed adjustments to it, “create consistency with rules for non-medical use, improve patient access, and reduce the risk of abuse of the system.”