A graffiti mural of Swedish climate activist Greta Thunberg has surfaced in Edmonton after the teen brought her message to the city.

The artwork appeared on a mural wall between 94 Street and Commonwealth Station. It’s unclear if it was painted before or after Thunberg’s appearance at the Edmonton climate strike on Friday.

It shows the 16-year-old activist with a similar look on her face as when she famously ripped into world leaders at a United Nations climate summit last month.

inside the media conspiracy to hype Greta Thunberg

The climate is a hot topic but will it motivate voters on Oct. 21

“You have stolen my dreams and my childhood with your empty words, yet I’m one of the lucky ones,” she said. “People are suffering, people are dying, entire ecosystems are collapsing.”

Her call to arms against global warming has inspired climate strikes around the world, including one in Edmonton last month. Then on Friday, Thunberg herself joined local Indigenous leaders for another strike that was counter-protested by a pro-oil and gas contingent.

Glen Carritt, organizer for the United We Roll convoy that rode from Red Deer to downtown Edmonton, said the group held its own protest because oil and gas workers are “frustrated” and feel their industry is under attack.

“We just don’t need any more of these people coming in and telling us about our environmental standards when they don’t really know and understand it,” he said.

The mural appeared to be painted by Aja Louden, who tweeted video of the wall on Friday. It reads “Thank you Beaver Hills Warriors,” a reference to the grassroots environmental group that helped lead Friday’s march, and “Thank you Greta.” 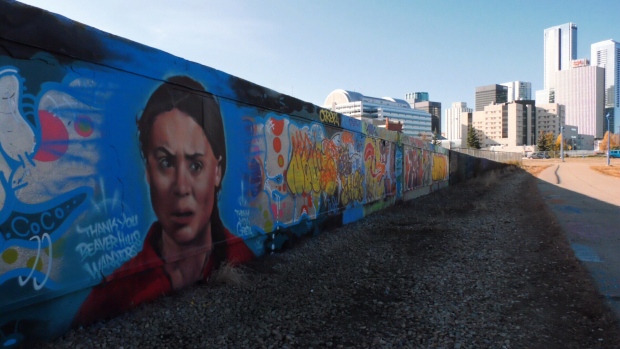