hink the Permian Basin has pipeline problems? Take a look at Canada

hink the Permian Basin has pipeline problems? Take a look at Canada

Power changes unveiled in Alberta, but a bigger jolt awaits

Coal and bitumen: Why the Norwegian pension fund is ditching the oilsands

GM-UAW talks take turn for worse; settlement not near

Drillers and energy analysts have worried all year about the rapidly shrinking pipeline capacity in Permian Basin that’s making it harder to get crude out of the nation’s richest oil field.

But those Permian problems pale in comparison to what’s facing Canadian producers, some of whom are selling their oil at a two-thirds discount to the U.S. prices.

In the Permian, oil has been sold at a significant discount to account for the fact that the pipelines are approaching capacity, if not already there. So, oil futures in Midland were selling at an $8-per barrel discount to the U.S. benchmark West Texas Intermediate crude oil this week.

The similar price spread in Canada has spun out of control.

Tom Kloza, global head of energy analysis at the Oil Price Information Service, pointed out on Twitter that Canadian oil futures were trading at $28 a barrel this week, compared with $75 for the U.S. benchmark.

In his tweet about the prices, Kloza felt it necessary to point out that the Western Canada Select number was “NOT a misprint!”

As recently as August, the spot prices averaged a spread of nearly $20. By this week, that had increased to nearly $50. Bloomberg said this is the widest margin it has recorded since 2008 and is the result of increased production, pipeline capacity shortage and refinery maintenance in the Midwest.

One Bloomberg story described this as a “brutal streak of new lows.” But the story did list a few solutions coming, although none particularly fast.

The Enbridge Line 3 replacement — stretching 1,000 miles to Wisconsin — is expected to increase capacity when it’s completed in the second half of next year. Other pipelines are farther away from completion, don’t have an estimated completion date and are facing protests and court challenges.

The more immediate solution is moving more oil by rail, which is a safety concern. A recent Washington Post story pointed to fears following a 2013 crash in Quebec that killed 47:

Environmentalists have sometimes described the rail option as a threat or “boogeyman” looming over the pipeline debate. But now the prediction appears to be coming true, as the volume of oil traveling by rail out of Canada — to the United States — has surged in the past few months as the country’s latest pipeline project foundered.

While the Permian’s pipeline capacity bottleneck continue to make headlines here, that region has a clearer way forward than Canada. 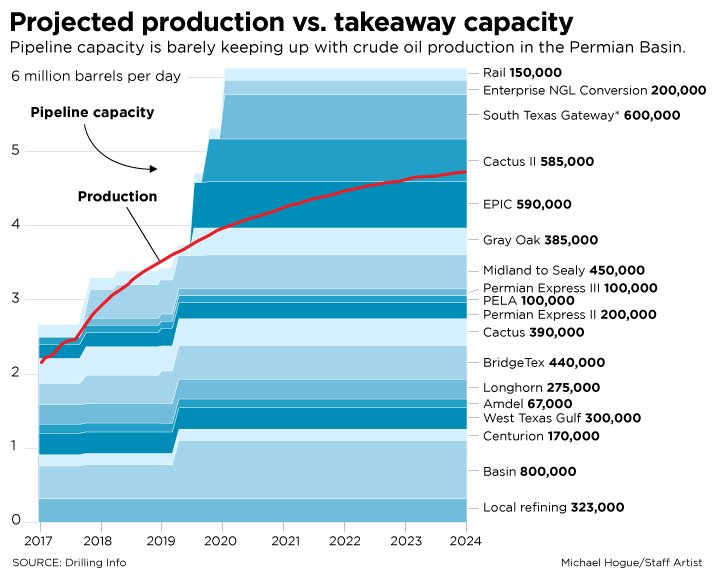 Major pipelines are in the planning stages or already under construction; several are expected to be completed next year and in 2020.

In the meantime, other regions are taking of advantage of the situation. The U.S. Energy Information Administration mentioned last month that “some operators with a geographically diverse portfolio of upstream assets plan to redirect capital expenditures to other onshore U.S. regions, while others may reduce well completions or look for alternative higher-cost transportation options.”

The Wall Street Journal this week looked at how production in the Bakken in North Dakota and Montana is surging, taking advantage of higher oil prices. The controversial Dakota Access Pipeline — built by Dallas’ Energy Transfer companies — opened up that region to the rest of the nation.

Still, Permian is predicted to continue to be a powerhouse despite the bottlenecks. The Energy Information Administration expects the Permian to account for more than half of U.S. crude oil production growth through 2019.

COMMENTARY: What should we do with Canada’s ISIS fighters?