An international advocacy group says it has collected thousands of names in a campaign calling for GoFundMe to remove a page that’s raising funds for Saskatchewan farmer Gerald Stanley’s family.

The online petition launched by the group SumOfUs says the crowdfunding website is profiting from the death of Colten Boushie, an Indigenous man who died on Stanley’s farm in 2016.

A jury acquitted Stanley of second-degree murder in Boushie’s death earlier this month and a GoFundMe campaign to assist Stanley’s family has raised more than $200,000.

Law could cause clashes

The petition says GoFundMe collects a fee for each donation and a percentage for processing the payment, and it argues the fundraising page violates GoFundMe’s terms that prohibit items that promote hate, violence, racial intolerance, or the financial exploitation of a crime.

“The courts have failed the Boushie family, and now, GofundMe is profiting off of their pain,” the petition states.

It further calls on GoFundMe to return all of the donations the campaign has raised.

A screen capture of the Gerald Stanley Support Fund page shortly after it was launched on Feb. 9. (GoFundMe)

GoFundMe spokeswoman Rachel Hollis says donations to GoFundMe campaigns in Canada are subject to fees by third-party processors that charge for handling the online payments, but that since December the site has relied on voluntary donations, or tips, from donors to help pay for its website.

“So a donor’s entire donation will go to the beneficiary of the campaign and they then have the option to voluntarily tip to help with the cost associated with the platform,” Hollis said in an email.

The jury heard that Boushie and some friends had been drinking before they broke into a truck on one farm, then headed onto Stanley’s property to ask for help for a flat tire. Stanley testified that he thought his ATV was being stolen. After firing warning shots, he said his gun went off accidentally, striking Boushie in the head as he sat in the group’s SUV. 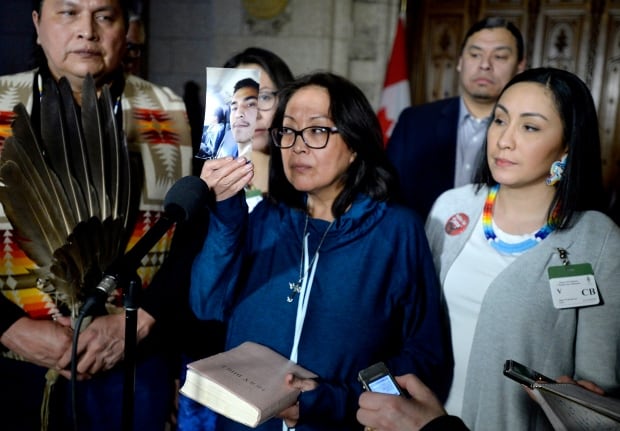 Debbie Baptiste, mother of Colten Boushie, holds up a photo of her son as she speaks to reporters in the Foyer of the House of Commons after a day of meetings on Parliament Hill, in Ottawa on Tuesday, Feb. 13, 2018. (Justin Tang/Canadian Press)

Since the not guilty verdict, protests and rallies have been held across the country demanding changes to the justice system and jury process to include more Indigenous people.

“This is one other way that we can talk about this, that there are companies and platforms that are providing a platform for money to be raised for the family for the man who shot and killed Colten Boushie,” said Emma Pullman, Canadian campaign manager with SumOfUs.

“What we’ve seen is a lot of anti-Indigenous, anti-First Nations comments have been on the rise since [Boushie’s] tragic death and I think that ultimately this is about calling out the racism that we’re seeing in this country and putting it in the spotlight.”

‘This is about calling out the racism that we’re seeing in this country and putting it in the spotlight.’
– Emma Pullman, Canadian campaign manager with SumOfUs

The group’s web page with the petition calling for the removal of the Stanley fundraiser says it has received over 12,000 signatures.

Previous petitions by SumOfUs have included one against Donald Trump’s plans for a golf resort in Scotland, as well as one in 2016 that called for WestJet CEO Greg Saretsky to step down over the
company’s handling of sexual assault accusations.

The GoFundMe campaign for the Stanley family says the money raised will help them “recoup some of their lost time, property and vehicles that were damaged, harvest income, and sanity during this
entire difficult situation.”

Hollis noted the campaign does not violate the crowdfunding site’s rules.

“Given the jury verdict, the fundraising campaign does not violate our terms of service,” Hollis said.