Caroline Mulroney, Christine Elliott and Doug Ford will be under the microscope over the next four weeks as they try to win over the Ontario PC membership.

For Progressive Conservatives, the question is clear: who is the best candidate to take on Premier Kathleen Wynne and NDP leader Andrea Horwath and lead the party through the spring election campaign?

A case can be made for each of the three, while rivals can point to flaws in each of them as well.

Ford clearly has a strong and loyal grassroots following. He persuaded hundreds of people to attend a rally on a cold and snowy Saturday night in Toronto to kick off his leadership campaign.

“The people who like Doug Ford and like what he says do not care about the problems, do not care about the occasional bozo eruption,” says political analyst Karl Bélanger, a former national director of the NDP and current president of the Douglas-Caldwell Foundation. “They see him as one of them and speaking for them and standing up for them. And that’s very important in politics.” 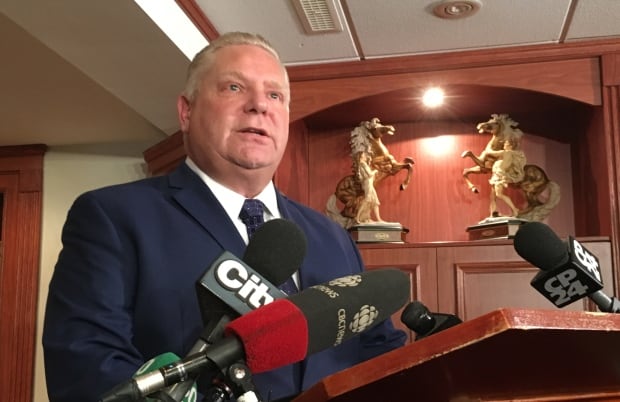 Ford’s pitch that he is an outsider, not part of the Tory establishment, could resonate with many of the new members who joined the PCs under Brown’s tenure.

That outsider status could also be his biggest weakness. Ford does not have a surplus of allies in the corridors of power in the PC party. He may dismiss that as unnecessary, even be proud of it, but to win a leadership race, friends in high places don’t usually hurt.

Ford will also need to be careful and disciplined in his public comments to avoid making people think it’s too risky to have him leading the party.

The second person to officially declare a candidacy, Elliott has more political experience than either of her rivals, including time spent as the deputy leader of the PC party.

“I do have nine years of experience as an MPP,” Elliott said in an interview with CBC’s Wendy Mesley. “I’ve also done a lot of work as a volunteer in my community, I truly believe I’m the one who can lead the party and beat Kathleen Wynne.”

But Elliott’s track record can also be seen as a disadvantage. Her critics will suggest she is bringing nothing new or fresh to a party that’s been out of power for 14 years. She failed to win the 2009 PC leadership contest, losing to Tim Hudak, and left politics after losing the 2015 race to Patrick Brown.

“Christine Elliott, sure she has experience,” said Toronto deputy mayor and PC candidate Denzil Minnan-Wong, a Mulroney backer. “She has the experience of losing twice in leadership campaigns.”

“I care deeply about this,” declared Mulroney in an interview with CBC News on Monday. “I know I can lead the party to victory on June 7th.”

That would be a huge accomplishment for someone who until now has never run for office. (Mulroney became the PC candidate in the riding of York-Simcoe by acclamation.) She has a skilled backroom team that is ready to roll, having inherited much of former leader Patrick Brown’s campaign machinery. So far, Mulroney has more endorsements from PC caucus members than either of her rivals.

Mulroney also has “instant name recognition,” said Bélanger. He said the positives that name provides in the way of media exposure and connections in the party outweigh any negative baggage that might be associated with her father’s time as prime minister.

Trained as a lawyer with a career in finance, Mulroney has an impressive business résumé. But she has no political experience. And politics – especially the bare-knuckle politics of a leadership race and an election campaign – is a whole new ball game.

“We don’t know if she’s going to hold her own in the political scene,” said Bélanger. “That said, everything that I hear about her is that she’s very good and there’s a lot of people who believe in her.”

The flip side of Mulroney’s business background is that her work experience on Wall Street and Bay Street, coupled with the fact her four children are in private school, could give her opponents ammunition to label her as privileged. A key factor will be whether ordinary people feel she comes across as authentic.