Over 1,000 BC Hydro customers are in the dark, after a car hit a hydro pole in Surrey.

The vehicle struck and bent the pole on King George Boulevard near 78 Avenue before 10 p.m. Thursday.

The accident caused a power outage in the surrounding neighbourhood which initially affected over 3,000 customers, according to BC Hydro.

Thousands of Toronto homes without power after explosion at hydro station

We’ll be investigating an outage affecting 3400 in #SurreyBC. Latest updates on our mobile site as available: https://t.co/eiD4jgmLDb pic.twitter.com/ByYPFaeyiX

The number of affected customers was reduced to half through the early morning hours.

Hydro expects to have power in the area fully restored by 6 a.m. Friday. 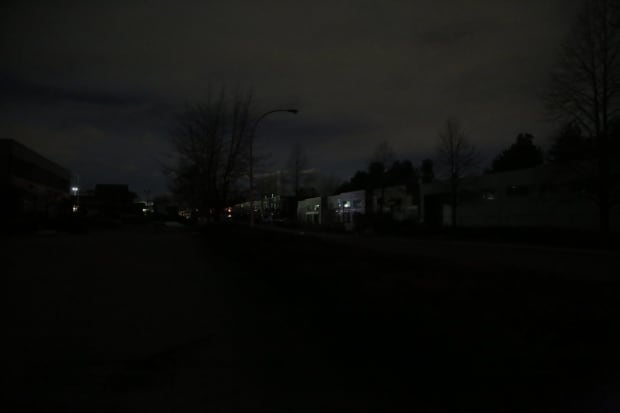 Power to homes and businesses near 78 Avenue and King George Boulevard was out for most of the night. (Gian-Paolo Mendoza/CBC)