The gifted lyricist – who was dubbed the country’s unofficial poet laureate – had been diagnosed with an incurable glioblastoma in May 2016.

His family said in a statement he passed away quietly surrounded by friends and relatives.

Prime Minister Justin Trudeau led the national mourning for the star with a tearful public statement.

“He loved every hidden corner, every story, every aspect of this country that he celebrated his whole life,” Mr Trudeau said, his voice breaking, on Wednesday.

“We are less as a country without Gord Downie in it. We all knew it was coming, but we hoped it was not.”

Despite his diagnosis, Downie continued to tour with Tragically Hip and produce music in the last years of his life. He recorded a solo double-album called Introduce Yerself in January 2017, which will be released on 27 October.

The band said in a written statement: “Gord knew this day was coming – his response was to spend this time as he always had – making music, making memories and expressing deep gratitude to his family and friends for a life well lived, often sealing it with a kiss… on the lips.” 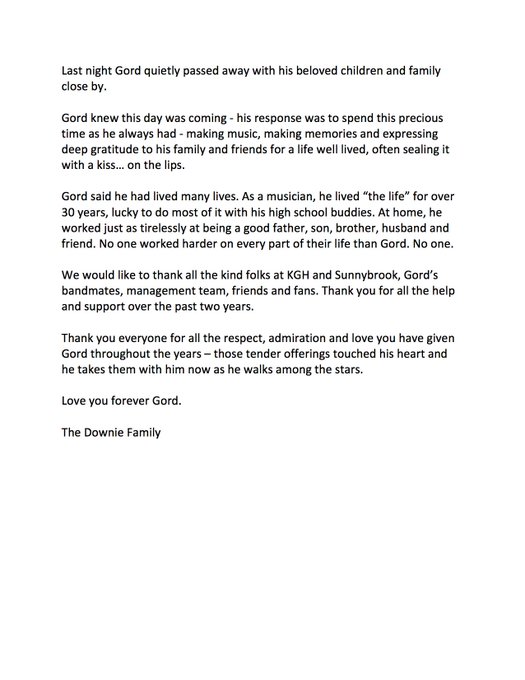 Downie’s lyrics often referenced Canadian culture and mythology, which endeared the band to fans who were used to seeing Canadian musicians “Americanise” their music to appeal to an international audience.

The Tragically Hip’s first full-length album, Up to Here, was full of the kinds of blues-tinged party songs like New Orleans is Sinking that helped make the band one of Canada’s most in-demand live acts across the country.

But it was the band’s subsequent albums, infused with obscure references to Canadian history and hockey and experimental song structures like Fireworks and Bobcaygeon that truly defined the sound of the Tragically Hip.

The band never made it big in the US – a fact that didn’t seemed to bother Downie or his band too much.

At home, they regularly sold out stadiums, but south of the border, they could often be found playing small-town bars, mostly filled with Canadian fans who had made the trek just to see them.

Far from a sign of failure, their lack of international fame only helped seal their reputation at home as a national treasure. Nine out of the band’s 13 studio albums went to number one on Canada’s music charts, and all of them cracked the top 10.

When news of Downie’s death broke, Canadians went online to share their own personal stories about times they had met the singer, or how his music had touched their lives. 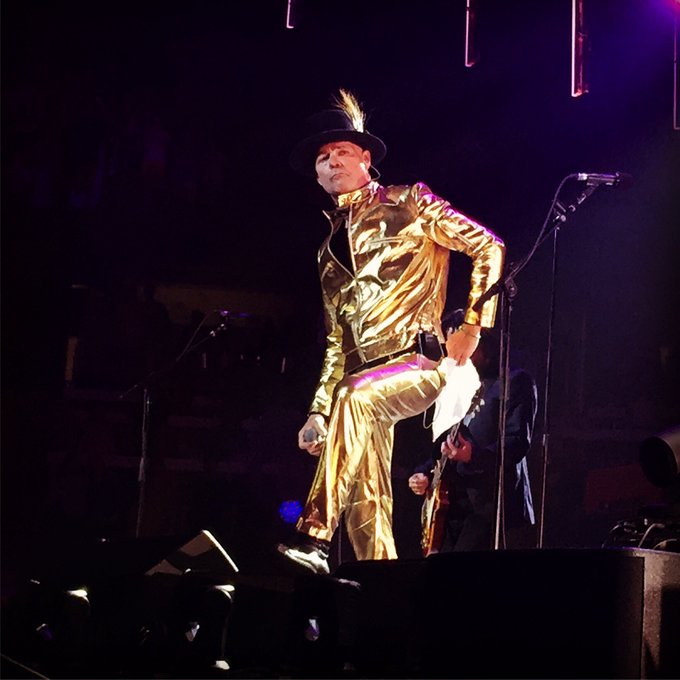 The tour culminated in a final show in Kingston, Ontario, the band’s hometown, that was broadcast live across the country.

Hundreds of public screenings of the broadcast were held, serving as a kind of living memorial for Downie.

In addition to music, Downie was a renowned activist for environmental and indigenous causes.

‘The poet is at rest’: Ottawa mourns loss of Gord Downie

In the final year of his life, he released a solo album and graphic novel titled The Secret Path, inspired by the true story of an indigenous boy who died while trying to escape a residential school.

For his work on reconciliation, Downie was awarded an Order of Canada by Mr Trudeau.

He was also bestowed an eagle feather by the Assembly of First Nations and an aboriginal name, Wicapi Omani.

In Lakota it means “man who walks among the stars”.

The Best And Worst Cities In Canada To Be A Woman